Despite of following misconduct(!!!), the current officiating director rewarded Prof U. C. Banerjee with deanship.

16 (d) The Review Committee has consulted several other Scientists regarding issue of plagiarism and shown the documents made available in this regard. In confidence all the Scientists, were of the opinion that prima-faci, this is clear cut case of plagiarism done by Prof. U.C. Banerjee and were of the that opinion NIPER must initiate action in this regard against Prof. U.C. Banerjee.

Xxxxxxx
However, Prof. K. K.Bhutani as a Dean and as the Reviewing Officer of ACR’s of Dr. Animesh Roy, contradicted his above statements. It also shows that Prof. K.K. Bhutani was subjective in his judgment when he was reviewing the ACR’s under some influence, whereas the above deposition, made by him confidentially may be closer to the truth and objective.
XXXXXXXXXXXXXXXXX

XXXXXXXXXXXXX
This above statement of Prof. Saranjit Singh was an eye opener for the Committee as it was a outburst of his ego which leads to objectivity, when the person with this type of mind set can never be objective.

The depositions made by Prof. K. K. Bhutani, Prof. Saranjit Singh, Prof. U.C. Banerjee, Prof. P. Rama Rao have a common nexus to keep Dr. Animesh Roy out of the system, since he has blown the whistle against the unethical acts and wrong deeds at NIPER. At the same time, all of them have no objection, if Dr. Animesh Roy is appointed as Scientist in NIPERs’ other than Mohali campus. It proves the fact that they do not have any doubt about the academic competence of Dr. Animesh Roy but certainly they do not want him in NIPER, Mohali. The academic assessment of two experts and Prof. H.P.S. Chawla are also inconsonance with the above mentioned observations of the Director, NIPER and his colleagues.

XXXXXXXXXXXXX
The Review Committee is of the considered opinion in the fact and circumstances of the case that the Principle of Natural Justice to the extent it requires, to be observed had not been complied with. The Review Committee is also of the view that Dr. Animesh Roy has been punished for his courage to blow the whistle against the unethical & corrupt practices at NIPER by his own HOD, Prof. U.C. Banerjee.
XXXXXXXXXXXXXXX

Comments expressed by Professor Saranjit Singh, Dean, NIPER and opinion about him as selection committee member.

“Prof. Ramesh Chandra requested Dr. Saranjit Sing to give his opinion about Dr. Animesh Roy, (a scientist – whose service were discontinued by NIPER about 2 years ago).

Prof. Saranjit Singh did not make any comment about the academic performance of Dr. Animesh Roy and said “once we decided to terminate him, it does not matter whether he is good or outstanding scientist or bad. So accordingly we       terminated his services.” He further said “Mr. Animesh Roy is short tempered person and had hunt over ego’s as he doesn’t report us. He further suggested that if Dr. Animesh Roy services are reinstated based on his academic strength – he will support only on one condition that, “he be appointed in any other new NIPER, but no in NIPER, Mohali. “However, if his services reinstated in NIPER, Mohali we four people will resign from NIPER under protest, as we cannot tolerate him or his presence in NIPER, Mohali at any cost.” During this conversation Dr. Saranjit Singh was very aggressive and forceful in conveying his viewpoint, but aggression was not objective rather he showed his total biased ness while giving his view point.”

DBT has denied a fellowship to Prof U C Banerjee, one of the senior-most faculty members of National Institute of Pharmaceutical Education and Research, Mohali, due to charges of plagiarism leveled against him. 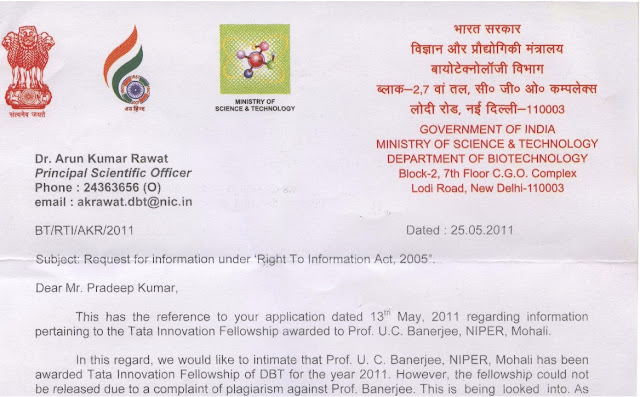 Thanks for the email. But I think this issue of corruption and Nepotism in NIPER needs to be checked. If these things are not bought into public notice via blogs etc nothing will happen.
Regarding the credibility of NIPER that will never fade. Scientist here in USA know what NIPER students are capable of and what they can do and we have proved it. But what is more important is that the evil of Corruption and Nepotism should be eradicated.

Why I am saying this is so strongly as I suffered myself. I wrote a review as a part of my curriculum under the mentorship of Dr. UC Banerjee. After everything Dr. Banerjee told me to give all my work including final review document and collected literature to this person named Mani Shanker, a PhD student in his lab. He told me that Mani Shanker will work on this and will publish it. I objected as I had worked lot on this but then I was asked to leave his office. I was too young at that time and could not do anything. later they published this article in CRIPS titled "Bhattacharyya MS, Singh J, Soni P, Banerjee UC (2003). Recombinant factor VIII for Hemophilia an overview of production technologies. Current Research Information on Pharmaceutical Sciences (CRIPS) 4(3): 2-8"
Later when I checked the content of the article published there was hardly any difference. But there was difference instead of me being first author, Mani Shanker was the first author, which was totally not fair. Ask a scientist whose hard work is stolen and given to someone else to put their name and publish. Its very painful.

So i would strongly suggest that this corruption crusade inside such a prestigious institutes should be checked. Only way to do this thing in INDIA is through media.