No action yet in Rs 10 crore graft case 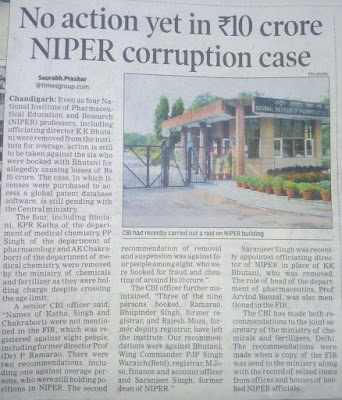 Even as four National Institute of Pharmaceutical Education and Research (NIPER) professors, including officiating director KK Bhutani were removed from the institute for overage, action is still to be taken against the six who were booked with Bhutani for allegedly causing losses of Rs 10 crore. The case, in which licenses were purchased to access a global patent database software, is still pending with the Central ministry.


A senior CBI officer said, "Names of Katha, Singh and Chakraborti were not mentioned in the first FIR, which was registered against eight people, including former director Prof (Dr) P Ramarao. There were two recommendations, including one against overage persons, who were still holding positions in NIPER. The second recommendation of removal and suspension was against four people among eight, who were booked for fraud and cheating "
The CBI officer further maintained, "Three of the nine persons booked, Ramarao, Bhupinder Singh, former registrar, and Rajesh Moza, former deputy registrar, have left the institute. Our recommendations were against Bhutani, Wing Commander PJP Singh Waraich (Retd), registrar, M Jose, finance and account officer and Saranjeet Singh, former dean of NIPER."
Saranjeet Singh was recently appointed officiating director of NIPER in place of KK Bhutani, who was removed. The role of head of the department of pharmaceutics, Prof Arvind Bansal, was also mentioned in the FIR.
The CBI has made both recommendations to the joint secretary of the ministry of chemicals and fertilizers, Delhi. The recommendations were made when a copy of the FIR was send to the ministry along with the record of seized items from offices and houses of booked NIPER officials.