In babudom, it's called the 'Behura factor': a reference to ex-telecom secretary Siddharth Behura who has been in jail for 14 months as an undertrial. Some officers believe that Behura is paying a horrible price for playing his expected role and doing what his minister wanted him to.

Babus handeling NIPER Mohali are not scared in concealing NIPER corruption from Raja Sabha,  it is evident from the answer provided to Rajya Sabha in response to the question No 3153 of Dr. Waghmare


3153. WAGHMARE: Will the Minister of CHEMICALS AND FERTILIZERS be pleased to state:


(a) whether it is a fact that the change of faculty members in various Committees of National Institute of Pharmaceuticals Education and Research (NIPER), Mohali, Punjab in 2010, has led to a saving of approximately ` 40 lacs per annum in purchase of diesel and around ` 60 lacs on account of spare parts purchased due to such Committees;


(b) who are the members of these purchase Committees and whether they continued to be on such Committees; and


(c) if not, the reasons for changing them?

The TRUTH; In his letter Dated: 08.04.11 Mr. Jain, member Board of Governor and Finance Committee  Wrote,

Subject: Proceedings of 23rd meeting of the Finance Committee held on 25th March 2011 – minutes thereof
XXXXXXXXXXXXX
11) In 2010 – 11 the budget allocation for repair & maintenance of building & engineering services, repair, & maintenance – machinery and lab utilities, repair, running & maintenance – vehicles was 185 lacs and actual spent was 149.27 lacs till February 2011. The budget proposals of 560 lacs are not justified and the same is to high and over 200% on the pervious year budget therefore my views of allowing maximum increase of 20% of the last year expenditure should be made after taking into account the substantial savings of around Rs. 1 Crore made by reconstituted committees in the case of diesel and spare purchases during 2010 – 11 and hence such budget proposal under these heads to should be restricted to 180 Lacs against Rs. 560 Lacs proposed.
XXXXXXXXXXXXXXXXX

1. As a Standing Purchase committee II member Dr. Roy was pointing out irregularities and ensuring transparency.
2. As a member of the institutional purchase committee, he stopped a number of wrongdoings and was instrumental in bringing about transparency in release of wages of contractual staff.
3. Based on his initiative, rules for purchasing Diesel is formulated and steady source of illegal income was stopped.
4. He is removed from Standing Purchase committee II suspended and dismissed to facilitate irregularities.

Now the question is who was ingesting the money of Illegal Diesel and spare parts purchase for last so many years? 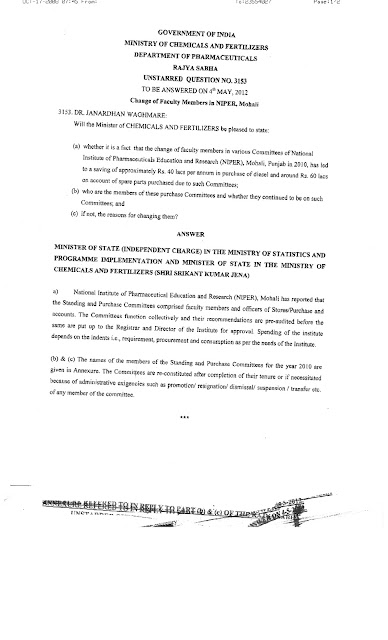