To facilitate corruption and administrative malice at NIPER names People's representative are carefully excluded from the BOG NIPER Mohali notification.

As per the act, Hon'ble Speaker, Lok Sabha has nominated Smt. Paramjit Kaur Gulshan (SAD) & Dr. G. Vivekanand (INC), Members, Lok Sabha, to be members of the Board of Governors of the National Institute of Pharmaceutical Education and Research (NIPER).

Hon'ble Chairman, Rajya Sabha has nominated Dr. V. Maitreyan (AIADMK), Member, Rajya Sabha, to be a member of the Board of Governors of the National Institute of Pharmaceutical Education and Research (NIPER).

Though all these nomination are still visible in the respective web site of house of representatives, none of the three public representatives are included in BOG by babus of Department of Pharmaceuticals (DOP).

Smt. Paramjit Kaur Gulshan (SAD) was a member of previous BOG and was instrumental in formation of ombudsmen committee for Dr, Animesh Roy and was pressing hard for reinstatement with retrospective effect. She was also very keen on keeping vigil for utilization of public funds at NIPER. Thus names of public representatives not included in the the BOG NIPER Mohali notification.

Ironically as per the Act no alteration/ amendment/ repealing of ACT, STATUTES or ORDINANCE of NIPER is not valid till it is assented to by the Visitor.

Pertinent question is who is the babu (!!) of DOP more powerful then the Speaker of Lok Sabha and the Chairman of Rajya Sabha.


Satya Seleucus..ki bichitro ei Desh (really Seleucus, what an amazing country is this!)

MEMBERS OF LOK SABHA IN VARIOUS STATUTORY / OTHER BODIES 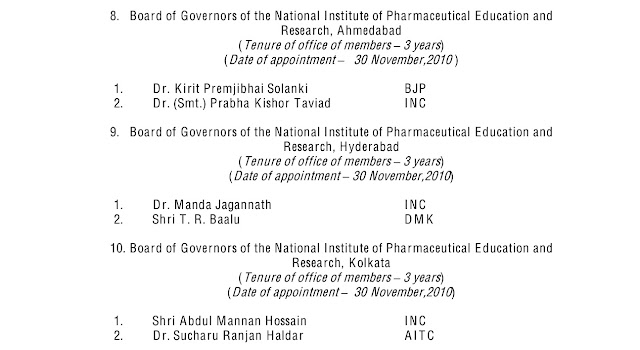 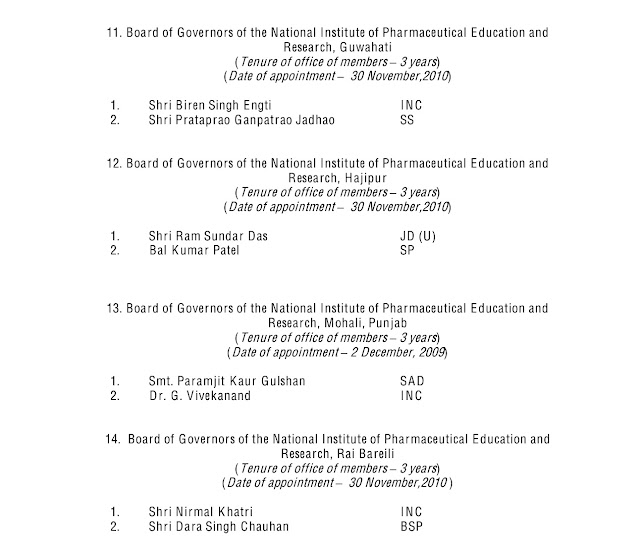 MEMBERS OF RAJYA SABHA IN VARIOUS STATUTORY / OTHER BODIES