Recrutement without advertisement is strictly prohibited by Indian law. Principle of Natural justice and fairness should prevail in all appointments. Highest court of law of india says......


Para 19 of the judgment CIVIL APPEAL NO. 1272 OF 2011,
“Therefore, it is a settled legal proposition that no person can be appointed even on a temporary or ad hoc basis without inviting applications from all eligible candidate. If any appointment is made by merely inviting names from the Employment Exchange or putting a note on the Notice Board etc, that will not meet the requirement of Article 14 and 16 of the Constitution. Such a course violates the mandates of Articles 14 & 16 of the Constitution of India as it deprives the candidates who are eligible for the post, from being considered. A person employed in violation of these provisions is not entitled to any relief including salary. For a valid and legal appointment mandatory compliance of the said Constitutional requirement is to be fulfilled. The equality clause enshrined in Article 16 requires that every such appointment be made by an open advertisement as to enable all eligible persons to compete on merit.”,


Extension of Ad-hoc appointment of Dr. Jyoti Paliwal as Professor in NIPER

In the meeting held on 28th of May 2012 the appointment and extension of Dr. Jyoti Paliwal was discussed It was inquired by one hon'bel BOG member whether any advertisement in this effect was published The reply of the BOG secretary was negative. it is opined by the Members that advertisement is a must before filling a regular post.
After deliberation the BOG unanimously resolved that in order to keep the principle of Natural justice and fairness in the view, the advertisement of Professor should be released so that the best tallant can be recruited.

However the extension letter is served even before draft minute is typed. The same registrar (!!) replied in many RTI quarry even after one month of BOG meeting. ".........since BOG minutes is not ratified information can not be disclosed."

What is the reason of hurry? and why BOG directions are ignored Nepotism or Economics? 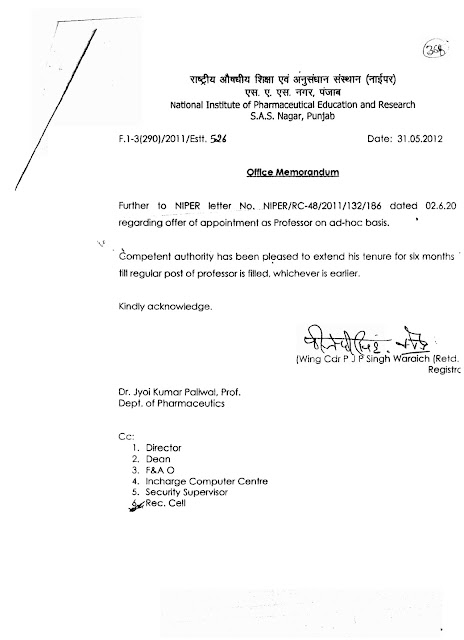 Appointment of registrar in NIPER

Ad-hoc appointment of Dr. Naresh Kumar as Professor in NIPER

NIPER Administration /Offg. Director has given 3 different statements at 3 different places regarding appointment of Dr.Naresh Kumar.

Statement 2 :  Appointment of Dr. Naresh Kumar is as Professor in Business Development Group, NIPER (Statement of Prof. K.K.Bhutani given to the Chairman, APDC and duly documented  in SIGNED final minutes of 13th APDC meeting held at NIPER on 19-11-2011, as agenda item no. 13.6)

Moreover the appointment is made without any advertisement and without proper selection committee. The regular selection process (as per  NIPER statutes and Govt. of India rules and constitution Art, 14 regarding equal opportunity)  involves:

- Short-listing of all candidates without any bias.

- Interview of the short-listed candidates by a Selection Committee constituted as per clause 3.6 of NIPER statutes and approved by the NIPER Board of Governors.

- Declaration of the result in a fair and transparent manner within a reasonable period of time.