Onymous vs Anonymous: The perception of CVO of DOP

In response to 25 plus specific questions of BOG members related to Financial and Administrative lapses the officiating director K. K. Bhutani submitted six pages of emotional fib. The only defence he could put up "three tented faculty members defaming NIPER globally. I categorically state that there is no "breakdown of systems and procedures" .

JS pharma, who is also CVO in Department of Pharmaceuticals vehemently supported officiating Director telling the blog is considered anonymous and the owner is google. Anonymous complains cannot be discussed in BOG, conveniently forgetting the facts,

1. w.r.t. the reply of Department of Pharmaceuticals that "Report is sought from BOG, NIPER regarding the allegations made in the BLOG" another question is tabled in Rajya Sabha,

2523. DR WAGHMARE: Will the Minister of CHEMICALS AND FERTILIZERS be pleased to refer to the answer to Unstarred Question 1912 given in the Rajya Sabha on 30 March, 2012 and state:


(a) whether Government has received the report from the Board of Governors (BoG);


(b) if so, the details thereof and the action taken by Government in each case;


(c) if not, the reasons therefor and the steps taken by Government to make the BoG responsible as per National Institute of Pharmaceuticals Education & Research (NIPER) Act, 1998;


(d) whether Government has made Mid Term Financial and Accountability review on each planned and non-planned funds released under Eleventh Five Year Plan;

(e) if so, the details thereof; and (f) if not, the reasons therefor?

2. An open letter is send to Chairman BOG, and all other members, disclosing identity and offering documentary proof of corruption.

"I offer my witness under oath voluntarily to present documentary evidences, photos and recording collected through RTI and from other reliable sources to this high power statutory committee of NIPER. My intention is to prevail the truth, in front of the Board of Governors."

3.  The Same CVO visited NIPER several times but could not see non-functional swimming pool costing 2 crore and non existant 1500 seater auditorium costing 5 plus crore.  He also could not see these cases are clear violation of GFR 2005 rule no 26,

Question is "Why CVO defending corrupt practices of NIPER administration?

The irony is his ancestor, previous CVO of Department of Pharmaceuticals ordered suspension and inquiry based on anonymous letter

"In India we have a tendency to shoot the whistleblower" Gen VK Singh: TOI 23rd May 2012.

Though the undated anonymous letter written by NIPER staff complained about Mr. Lalit Kumar Jain, Member NIPER Board of Governors as well as Finance committee and officiating Director K. K. Bhutani, regarding funneling out huge sums of money only Nilanjan Roy is singled out by  Joint secretory Department of Pharmaceutical Arun Jha, IAS 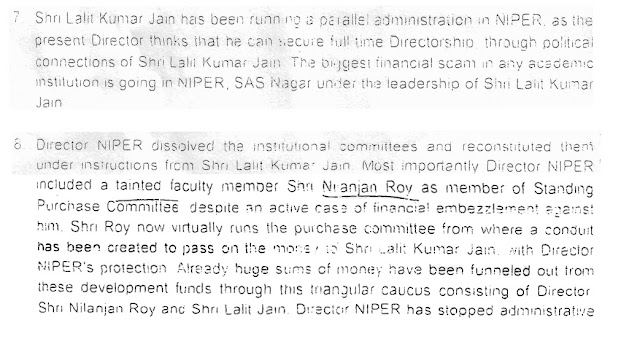 In response to the anonymous letter NIPER then acting registrar  Dr. Harmeet Sing IRS  wrote the truth this committee is only recommendatory has no power to purchase anything. 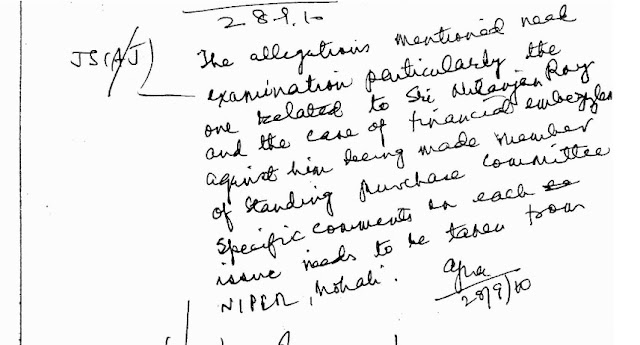 Now the question is why?

As a JS pharma Mr. Jha involved in disbursing money of NIPER and also served a CVO, Thus he was well aware of activities of Whistle blowers of NIPER Dr(s). Nilanjan Roy, Parikshit Bansal and Neeraj kumar and wanted to eliminate the roadblocks in money making corrupt practices of NIPER nexus.

16. That on 31st March 2011 a RTI quarry was send to to the CPIO, CVC seeking to know, whether CVC had send any letter to CVO DOP for conducting inquiry regarding diversion of funds under 11th plan or not? Copy of the letter enclosed as ANNEXURE P-13 (Page 39).

In response CPIO, CVC supplied copy of two letters dated 23.02.2010 and 11.05.2010 respectively in which clear cut directions had been given to the CVO Mr. Arun Jha for conducting inquiry as reproduced below,

“it is observed that the issue appears to be one of diversion of funds from one area to another. Deptt. may therefore take up the matter for auditing. In case any vigilance angle is indicated, same may be dealt with in accordance with prescribed rules ”
Copy of the letter is enclosed in ANNEXURE P-14 (Page 40-42).

17. That from the above it is clear that the CVO from DOP has submitted false and misleading information in response to RTI quarry. He submitted that no directions had been received from the CVC where as CVC had sent two letters to him for conducting inquiry and taking necessary action.

“CVO must obtain all papers with respect to a complaint and investigation should be commenced immediately. The investigation report should be submitted to the commission within two weeks “

The order also directs that, CVO should ensure that no punitive action is taken against the whistleblower”. In this particular case CVO violated all the above directions as per office order of CVC. Copy of the office order is enclosed in ANNEXURE P-15 (Page 43).

In the view of above facts and supporting material provided herein, I appeal to you for the most stringent and exemplary action against Mr. Arun Jha, CVO, Department of Pharmaceuticals, for non-conduct of an enquiry as directed by CVC, violation of CVC Guide line and submission of false information in response to RTI. His actions have undermine the faith and trust reposed to by the common man in the office of the Central Vigilance Commission, the office of the ministry under which NIPER falls and also faith in an officer of elite service like the Indian Administrative Service.