1452.  DR. JANARDHAN WAGHMARE: Will the Minister of CHEMICALS AND FERTILIZERS be pleased to state:

(a) the eligibility criteria specified for the selection of Registrar as per advertisement published by National Institute of Pharmaceutical Education and Research (NIPER) Mohali in 2011;

(b) the details of candidates who applied, their qualification, experience which met the advertisement criteria but were not selected;

(c) whether it is a fact that complaints have been received about the candidate selected not meeting the eligibility criteria as per advertisement; and

(d) if so, the steps taken to fix accountability in the matter?

1. For the post of the registrar prerequisite was 15 years of administrative experience, of which 8 years shall be as Deputy Registrar or an equivalent post (AGP Rs 7600). However as per the document PJP Singh Waraich joined as Wing commander wef 17 June 2008 in Rs 7600 AGP. Thus not fulfilling the criterion.

3.  A Civil Writ Petition is filed in Punjab and Harayana High Court challenging the appointment of Registrar NIPER in CWP 6458 of 2012 next date of Hearing: Sep 6 2012.


4. In a similar case; appointment of Assistant Registrar of Punjab University was set aside by Hon'ble Punjab Haryana High Court, judgement Civil Writ Petition No.5171 of 2011 .

5. Same decision upheld by double bench of the same court in L.P.A. No. 1030 of 2011 (O&M) "Having heard learned counsel, we are of the considered view that no opportunity is provided to interfere in the opinion  expressed by the learned Single Judge.  The appellant does not fulfil  the necessary conditions concerning appointment to the post of  Assistant Registrar which require administrative experience of five years.  There is no merit in the instant appeal.  Dismissed"

6. it is also reported in HT Mohali Live on 19 Jul 2012 that “Bhutani had extracted Rs. 20 lakh from Waraich and had interviewed him in May. Waraich had then been appointed despite the fact that Waraich did not meet the requisite qualifications of eligibility for the post of Registrar at NIPER, Mohali.”

National Institute of Pharmaceutica Education and Research (NIPER), Mohali, established by the Act of Parliament under the aegis of Ministry of Chemicals and Fertilizers, Govt. of India is organising ‘Joint Counselling’ from July 17-19. This ‘ Joint Counselling’ is for admission to Masters Programme M.S. (Pharm.), M.Pharm., M. Tech (Pharm.), for all seven NIPERs, situated at Guwahati, Hajipur, Hyderabad, Kolkata, Rai Bareilly, Ahmedabad and S.A.S. Nagar. 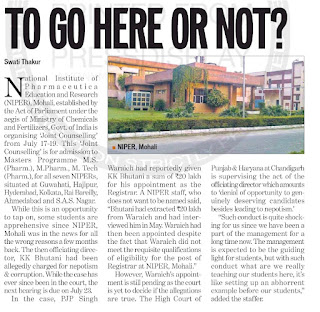 While this is an opportunity to tap on, some students are apprehensive since NIPER, Mohali was in the news for all the wrong reasons a few months back. The then officiating director, KK Bhutani had been allegedly charged for nepotism & corruption. While the case has ever since been in the court, the next hearing is due on July 23.


In the case, PJP Singh Waraich had reportedly given KK Bhutani a sum of R20 lakh for his appointment as the Registrar. A NIPER staff, who does not want to be named said, “Bhutani had extracted R20 lakh from Waraich and had interviewed him in May. Waraich had then been appointed despite the fact that Waraich did not meet the requisite qualifications of eligibility for the post of Registrar at NIPER, Mohali.”
However, Waraich’s appointment is still pending as the court is yet to decide if the allegations are true. The High Court of Punjab & Haryana at Chandigarh is supervising the act of the officiating director which amounts to ‘denial of opportunity to genuinely deserving candidates besides leading to nepotism.’


“Such conduct is quite shocking for us since we have been a part of the management for a long time now. The management is expected to be the guiding light for students, but with such conduct what are we really teaching our students here, it’s like setting up an abhorrent example before our students,” added the staffer.