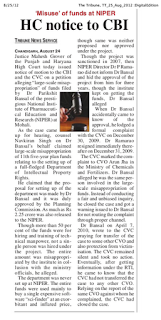 6. C.B.I. Chandigarh through its D.I.G.
Dr. Parikshit Bansal was vocal regarding misappropriation since last three years and left no stone unturned for justice. After several failed attempts to alart governing authorities of NIPER and statutory anti-corruption bodies Dr. Bansal sought intervention of the court to issue directions to CBI to conduct inquiry and establish IPR Department at NIPER. In the petition  Dr. Parikshit Bansal had stated that NIPER administration is guilty of wilful breach and disobedience of GFR 2005.

CWP No. 14537 of 2012, under Articles 226 / 227 of Constitution of India is filled for issuance of a writ of Mandamus or any other writ order or direction, directing the C.B.I. to conduct a detailed and thorough investigation into the financial irregularities and lapses which have taken place at National Institute of Pharmaceutical Education and Research (NIPER), as the CVC on the complaint of the petitioner has failed to hold an inquiry into the matter and thus failed to perform its mandatory duties.