Chandigarh: The Ministry of Science and Technology has denied a fellowship to Prof U C Banerjee, one of the senior-most faculty members of National Institute of Pharmaceutical Education and Research, Mohali, due to charges of plagiarism levelled against him. Recently, Banerjee was chosen for the Tata Innovation Fellowship 2011 that is granted by the Department of Biotechnology.

But the ministry decided to hold back the fellowship after it came to its notice that charges of plagiarism were established against Banerjee by an inquiry committee constituted by NIPER’s Board of Governors in April 2009. The fellowship, ranked very high in scientific circles, comes with a remuneration of Rs 20,000 per month and a contingency grant of Rs 5 lakh per year.

“This competitive fellowship is to recognise scientists with an outstanding track record...(and) reward interdisciplinary work of high quality with emphasis on translation and innovation,” according to the biotechnology department. The decision not to grant the fellowship was known after the Department of Biotechnology sent its response to a RTI query on it.

Arun Kumar Rawat, Principal Scientific Officer at DBT, said in reply to the query that if it comes to the notice of the department at any stage that the research is plagiarised, “the department takes necessary steps to confirm the plagiarism by setting up an independent committee of experts to look into the matter. Action can be taken if the allegation is found to be true.”

The charges of plagiarism against Banerjee were levelled by Dr Animesh Roy, a scientist working in the Department of Pharmaceutical Technology (Biotechnology). Banerjee was his head of the department.
Following the charges, Roy’s contract was not renewed by NIPER on completion of his five-year term and he complained to the Board of Governors.

The Board of Governors conducted an inquiry and the scientists consulted for the investigation found it to be “a clear case of plagiarism by Prof UC Banerjee”, the report said.

The inquiry report states, “It is clear that the Director NIPER or the NIPER administration failed in performing their duties...It is also clear that the Director was all out to protect the misdeeds and unethical acts of Prof UC Banerjee for reasons best known to him, and that too when both the chairman of the BOG and the BOG were of the opinion to initiate action against Prof Banerjee.”

The inquiry committee said Roy’s services should be reinstated “retrospectively with all consequential benefits”. It also said NIPER should initiate action against Banerjee. But despite all these neither has Roy being reinstated nor action being taken against Banerjee. 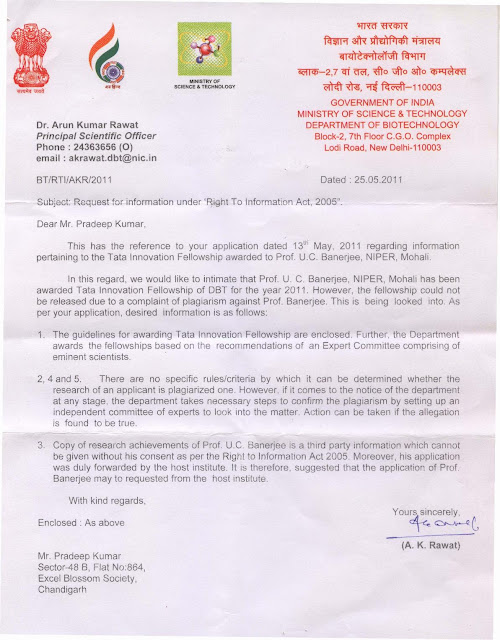