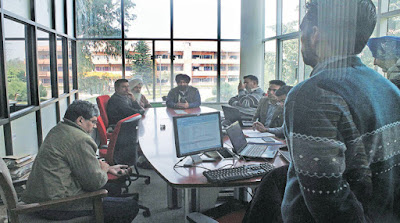 Theft of costly research instruments/ furnitures etc are taking place at NIPER Mohali regularly, but none were reported to police. What is depicted here is only tip of the iceberg; detail audit, inspection and verification may recover more skeletons from the cupboard.

1. Theft of one equipment from Dept. of Pharmaceutics cost 1,94,033 reported but no action were taken. After RTI inquiry started.

2. In the file noting Finance officer noted “As per Gov of India General Finance Rule 34 (GFR-2005) all loses theft etc exceeding Rs 10000 shall be reported to the police for investigation at the earliest.”

3. The financial loss incurred needs to be recovered immediately and an enquiry committee consisting of Dean HOD ORG and AR (purchase) should look into and place their report by July 2010” Director


The committee submitted report on 02.09.2011(though officiating Director asked by July 2010). Extract of the report are as follows;

B.  "This is a case of theft not of misplacement but it could not be established as who has stolen the probe [accessories of ultrasonic processor 220V-Cat. No 04712-81]

Thank God!! Ultrasonic probe of Biotechnology is also missing. Otherwise committee could have established that it was stolen by Biotechnology faculty.

D. "The committee also noted that the Ultrasonic processor of Pharmaceutics Deptt. was purchased against DST project, undertaken by the institute. The NIPER is custodian of all assets purchased under the project"

E. "The committee also observed that recoveries in respect of the loss could not be effected from any body despite orders of the director dated 29.06.2010 "

Why not Herr Chairman ? Person responsible is your Courtier?

" The matter is reported to the Board of Governors as it is the competent authority in which is vested the rights to write of the item. Although the primary responsibility was that of the students, as at the time of loss, the probe was in the physical custody of the students who spent last day in the institute on 30.06.2011. Dr. Sanyog Jain and head, Department of Pharmaceutics could not be held responsible for delay in reporting as they had very little knowledge of CCS/ GFR rules to deal such issues. Still their endeavored to trace the probe and fix the responsibility to the best of their knowledge. The senior administrative officer i.e Officiating Registrar and Deputy Registrar who could have handled the matter more diligently using their expertise are no more in the service of the Institute"

2. Then what is the responsibility of faculty? Attending consultancy projects for personal gain?

3. Why inquiry committee made report after more then one year of Director's order?

4. Ignorance of rules or deliberate act of hiding? Why nothing is started till an RTI is filed?

5. What about Probe of Biotechnology? Whose responsibility was that?

6. Under cluse; DST can take back equipments purchased in the project, if DST asks back the equipment what will be the answer?

7. Who knows what other instruments are missing from other departments? Physical verification is not done in proper manner since inception of NIPER. CAG pointed out that in several reports.

8. The TEM purchased utilizing four and half crore in another DST project is UNDER who's responsibility Herr ....(who wrote the submission to BOG)?
Posted by Knowmics at 06:00