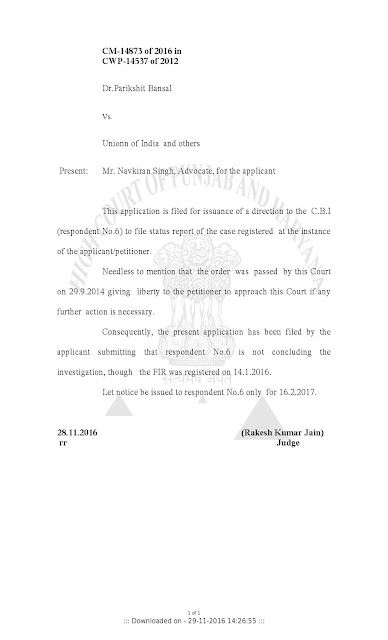 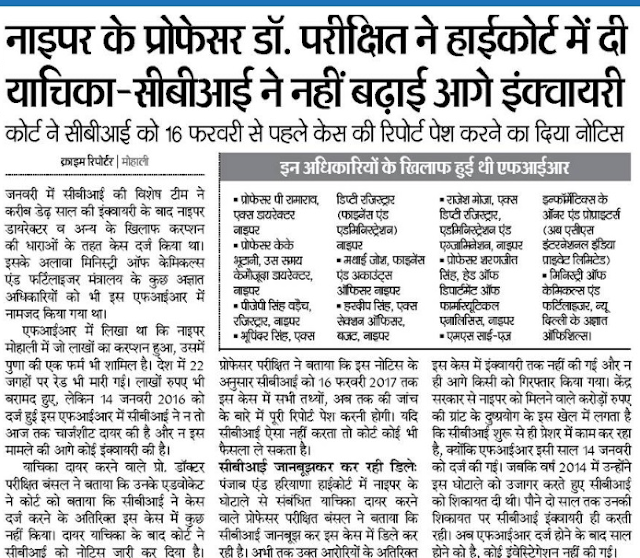 Posted by Knowmics at 18:25 No comments: 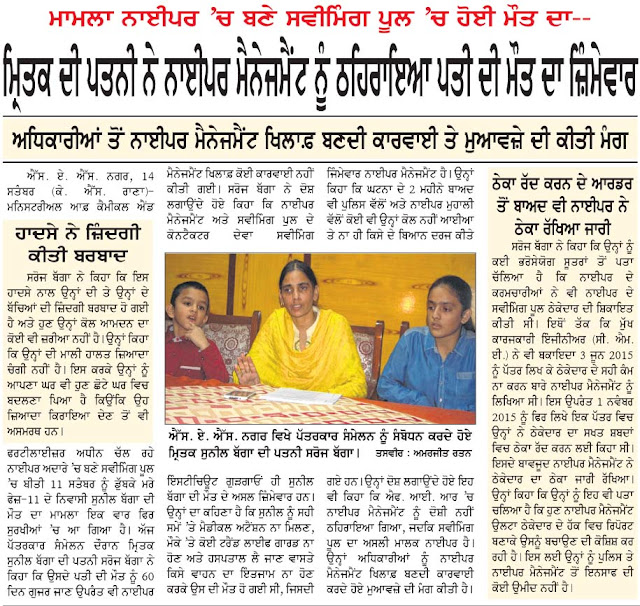 Posted by Knowmics at 21:26 No comments:


Around two months after a 40-year-old man drowned in a swimming pool at the National Institute of Pharmaceutical Education and Research (NIPER) at Sector 67 here, family members of the deceased alleged police inaction in the case. They also demanded that the NIPER authorities should also be made a party in the case. Saroj Bagga, wife of the deceased Sunil Bagga, alleged that after two months of the incident, there was no development in the case. “The accused are roaming free and nothing has been done against the NIPER authorities in this regard,” said Saroj. She alleged that her husband had drowned due to sheer negligence and improper infrastructure at the pool. Sunil Bagga, a manager with Ola Cabs and a resident of Phase XI, had drowned in the pool on September 11 when he went there, along with his six-year-old son, Ishit, for swimming. The police had booked two persons, Davinder Lamba, a Delhi-based contractor, who has been given the pool on a contract basis and his manager-cum-trainer, Rajiv, under Section 304A of the IPC (death due to negligence) at the Phase XI Police Station, here on the complaint of Saroj Bagga. The police claimed that they had recorded the statements of the contractor’s staff and other authorities concerned at the NIPER. The deceased’s viscera report is still be awaited. Wing Commander PJP Singh Waraich (retd), registrar at NIPER, said the pool had been closed since the incident occurred. “The police have recorded our statements. As per the clause of the contract, the entire responsibility of the pool is lying with the contractor,” said the Registrar. The family also demanded CBI inquiry into the case.

Posted by Knowmics at 06:51 No comments:

Illegal constitution of Senate NIPER by Dr. KK Bhutani whose nomination in BOG is stayed.

Just now, I came to know that even after the stay order of Hon'ble High Court, Dr. Bhutani is further planning to constitute the Senate-NIPER in illegal manner which needs the nomination of three persons by the BOG in consultation with director during the BOG meeting. The relevant rule position in NIPER Act and Statute are given below:

As per NIPER Act clause 13(d) [also in NIPER statute clause 3.2.1(c)]:
13 (d) three persons, not being employees of the institute, to be nominated by the Chairperson in consultation with the Director, from among educationist of repute, one each from the fields of science, engineering and humanities and one of them shall be either from the Scheduled Castes or from the Scheduled Tribes; and

Thus Chairperson (who is the chairperson in BOG meeting) has to nominate above three persons in consultation with Director NIPER during the meeting. However Dr. KK Bhutani is stayed from BOG, NIPER, thus it won't be possible to constitute the Senate, NIPER till these two tainted persons are there in Institute or there is a revoke of the stay order.

In pendency of the decision of Hon'ble High Court in CWP-22655/2016, any constitution of Senate in NIPER will be illegal and will amount to the contempt of the court order dated 27.10.2016.

I am sending this information to all nominated Hon'ble members of BOG, NIPER-Mohali, Officials of Department of Pharmaceuticals and relevant persons in the same. It is important to mention here that the officials also constituted the Senate earlier in 2011 in violation of NIPER Act/Statutes and Hon'ble High Court Has quashed/ordered dated 04.11.2012 in CWP-18789/2011 to renotify the Senate as per NIPER Act/Statues and their appeal was also dismissed by Hon'ble Division Bench of Punjab and Haryana High Court (I was the petitioner in this application).

Inspite of court stay order on the participation of Dr KK Bhutani Off. Director) and Mr PJP Singh Waraich (Registrar, NIPER)  today it has been seen that BOG meeting has been conducted at NIPER, Mohali.

It can be confirmed by BOG Chairman Dr. VM katoch Ph:99xxxxxx01

Or the other BOG menber Prof R S Verma::94xxxxxx61

It amounts to the contempt of Court if it so.(The Interim order is attached herewith)

On bejalf of NREWA a letter (along with Court order, CBI FIR, New Paper Cuttings and forged list of BOG ) is given to BOG member which is also attached herewith.Whereas attempt was made by security of NIPER to stop it. 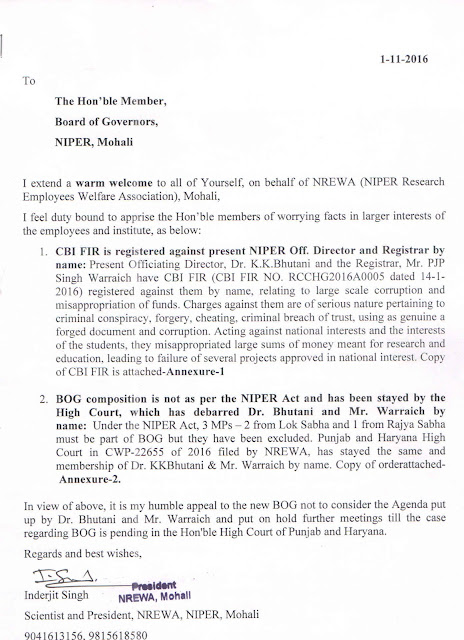 Posted by Knowmics at 17:31 No comments: