Vishav Bharti, Hindustan Times Chandigarh, June 18, 2012: The alleged move of the Post Graduate Institute of Medical Education and Research (PGIMER) director to bypass the entire selection process to favour the appointment of a close aide has been snubbed by the governing body of the institute. The governing body also decided to reduce the salary of the director's officer on special duty (OSD), Swaran Saini, from Rs 55,000 to around Rs 20,000.

The decision was taken in the governing body meeting, which was chaired by union health minister Ghulam Nabi Azad at PGIMER on April 28. The institute would also recover the amount from Saini, which was paid to him in last several months.


After Saini's retirement on January 31, PGIMER director Dr YK Chawla allegedly bypassed the process to hire him as OSD at a salary of Rs 55,000 per month. Rather than following the proper process of proposing Saini's new job profile through the establishment branch or deputy director's office, Dr Chawla directly sent a proposal to the union health minister for approval to hire Saini as OSD at a salary of Rs 55,000. With this, Saini's pension and new salary reached around Rs 75,000.
Though the governing body is the only competent authority to take the decision in the absence of a meeting, the union health minister, who is also president of the institute, can take decisions on behalf of the body. However, such decisions are subject to approval of the governing body. So when the decision came for approval of the governing body, it was decided that "the lumpsum amount to be paid to Saini should be Rs 55,000 per month or the difference between the last pay drawn and his pension, whichever is lower"
The last pay of Saini was around Rs 40,200 and he was sanctioned a pension of Rs 20,100. He will now get Rs 20,100 instead of Rs 55,000. Sources said even the excess amount to the tune of Rs 35,000 per month paid to Saini would be recovered from him with retrospective effect from February 1.
The body also decided that Saini shouldn't be engaged for more than one year. Significantly, Saini completed 60 years of age, which was also his age of retirement, in January 2010. However, he was given re-employment for two years. After that he was hired as OSD by the director. In the past, PGI Faculty Association and Employees' Union had asked the director and health ministry to relieve Saini.
Saini was not available for comment despite repeated attempts. When contacted, PGIMER official spokesperson Manju Wadwalkar said "whatever decision was taken, it was as per the rules".

Same fate awaits for adhoc professor at NIPER?
Posted by Knowmics at 06:41 No comments:

Practicing advocate hired at NIPER, under guise of consultant to victimize whistleblowers!

Officiating director of NIPER, Mohali, has done it again. He hired a practicing advocate of the Punjab and Haryana High Court, Mr. Hari Mohan (Enrolment No. P/516/2008), under the guise of a ‘consultant’ to harass whistleblowers and hide his misdeeds.

Several formal complaints by whistle blower faculty members have been made against Dr. Bhutani regarding misappropriation of 11th Five Year Plan funds running into crores, drawing pension and full salary, violating NIPER statutes and rules, indulging in nepotism and illegal appointments and also misuse and abuse of power to victimize juniors by damaging their confidential reports.  Now he has capped it all by hiring an advocate to harass and victimize whistleblowers, using Tax Payer’s money!

Vide office order dated 22-6-2011 it was informed to all that Mr. Hari Mohan has joined his duties on 15-6-2011 at NIPER as consultant (Administration and Establishment) for one year on a monthly remuneration of Rs.40,000/-. The order made no mention that Mr.Hari Mohan is a registered lawyer, practicing in Punjab and Haryana High Court.

A legal practitioner while he is on the rolls of a high court, is not entitled to enter into any business or service without permission of the court. If he does, disciplinary action can be taken against such person, under Section VII of the Bar Council of India Rules.

RTI response from Bar Council of Punjab and Haryana, have revealed that when taking up employment at NIPER, Mohali, Mr. Hari Mohan, Advocate neither informed the Bar Council nor sought any permission to take up the job. However, 5 months after joining the job at NIPER, on 30-11-2011 he submitted a request to the Chairman, Bar Council, Chandigarh for suspension of his enrolment as he wished to restrict himself to legal consultancy and also honorary/social work. He did not disclose that he had already joined NIPER, Mohali and taken salary from 15-6-2011 onwards.

It is interesting to note that Mr. Hari Mohan, Advocate at the time of submission of this application was already on the rolls of NIPER for more than 5 months, drawing regular salary and assisting the ‘Director/Registrar’ in day to day affairs (devising strategies to kill whistle blowers ??).

While enjoying the tax payers money, he has ably assisted the NIPER administration in victimizing NIPER whistleblowers, who have been forced to knock the doors of the court to safeguard their interests. 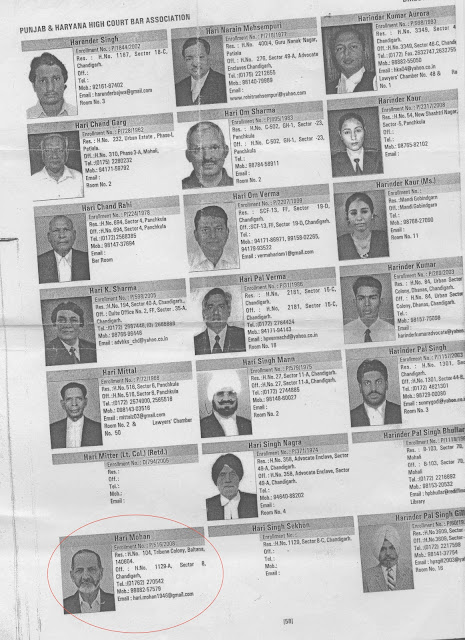 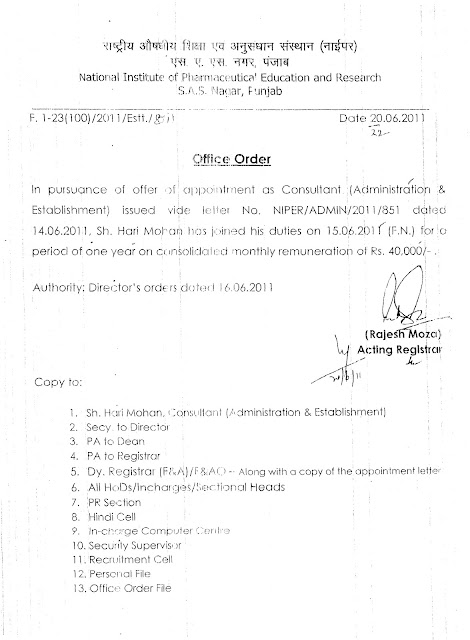 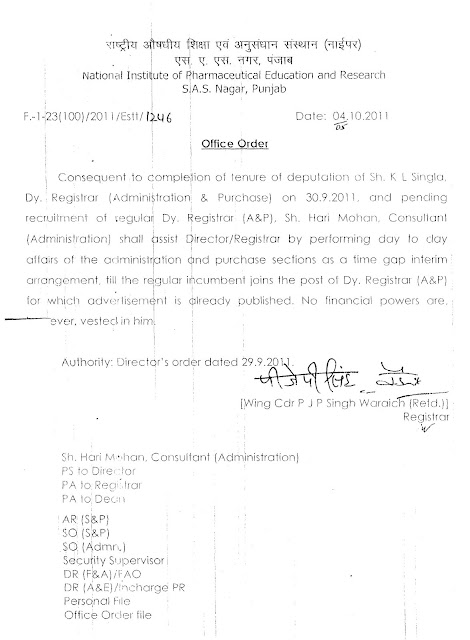 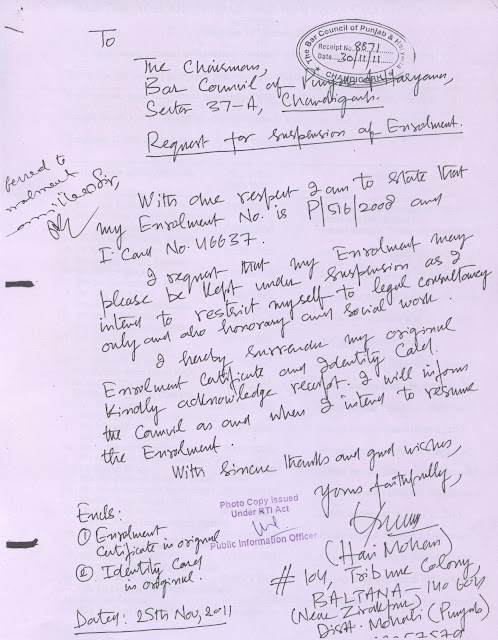 The Central Information Commission (CIC) has stated that a citizen’s right to information would get primacy over an individual’s right to privacy, adding weight to the principle of transparency.

In an important decision, the transparency panel said though the state had no right to invade the privacy of an individual but in extraordinary circumstances, where the government sought information from citizens, details could be given out under the Right to Information (RTI) Act.

This would make job applications as well as details given by citizens to seek licence and passport etc, open to disclosure under the RTI Act. The Commission trashed a circular issued by Department of Personnel and Training (DoPT), the nodal ministry to deal with the transparency law, prohibiting disclosure of such information, cumstances, special provisions of the law will apply, usually with certain safeguards. Therefore, where the state routinely obtains information from citizens, this information is in relationship to a public activity and will not be an intrusion on privacy,” Information Commissioner Shailesh Gandhi said.

The commission was dealing with an appeal filed by Hyderabad resident P Pramod Kumar seeking information on the application as well as other certificates filed by Savitha Kalikar for obtaining passport, which were denied by the authorities on the ground that those were personal information exempted from disclosure. Gandhi rejected the argument of the Public Information Officer of Regional Passport Office that there was a circular from DoPT, which stated such details could not be released.

* Job applications, details given by citizens to seek licence and passport etc are open to disclosure under RTI Act

* Department of Personnel and training (DoPT) circular against making such disclosures trashed
Posted by Knowmics at 04:00 No comments:

The Madras High Court on Friday restrained the Vice-Chancellor of Pondicherry University from taking any policy decision or making appointments for a week.
It passed the order on a petition by K. Kaliaperumal, general secretary of the Pondicherry University Non-Teaching Staff Welfare Association.
The petitioner stated that J.A.K. Tareen was appointed the Vice-Chancellor for five years from April 16, 2007. His term ended on April 16 this year. As per rules, the V-C should continue in office until his successor is appointed and joins office.
The Visitor may direct the V-C whose term of office had expired to continue in office for a period not exceeding one year. In the case of Prof. Tareen, he could continue in office until his successor was appointed.
Mr. Kaliaperumal said there was a doubt as to whether the V-C was continuing in office validly and whether this had been permitted by the Visitor. The university registry was silent on the issue.
An RTI application by S. Adhavan had received a reply from the President’s Secretariat by a letter dated June 1 this year, which clearly confirmed that Prof. Tareen was continuing in office. This was not in accordance with the legal requirements.
He prayed the court to grant an injunction restraining the V-C from continuing in office and show cause as to under what authority he was continuing after his term ended.
In his order, Justice N. Paul Vasanthakumar said that he heard senior counsel V.T. Gopalan appearing for the petitioner. Haja Mohideen Gisthi, Senior Central Government Standing Counsel, took notice for the Union Human Resources Development Ministry. The petitioner should take notices to the university Registrar and the V-C.
The Judge said that it appeared that the relevant rule of the university’s statute had not been complied with as per the information furnished by the Presidential office. It had been stated in the affidavit that the V-C was taking policy decisions and making appointments contrary to the instructions of the Union HRD Ministry of June 19 and February 7. Hence the restraint order.
The matter has been posted for June 29.

Most of the researchers were not aware of final approved objectives/budget of their research projects under the 11th Five Year Plan (2007-12) , because the NIPER Directors (past and officiating) during this period,  had not provided them with a copy of the final approved 11th Five Year Plan document. This document contained details of the approved objectives and the budget approved for specific research activities.

In several projects, money had either not been released at all (100% misappropriation) or  just 40-50% of the amount received from Ministry was released to the researchers while balance was misappropriated.

Details of some research and infrastructure projects where heavy misappropriation took place, are given below:

Posted by Knowmics at 07:12 No comments:

Posted by Knowmics at 06:17 No comments: