Posted by Knowmics at 20:21 No comments:

Another PIL against "Institute of National Shame" 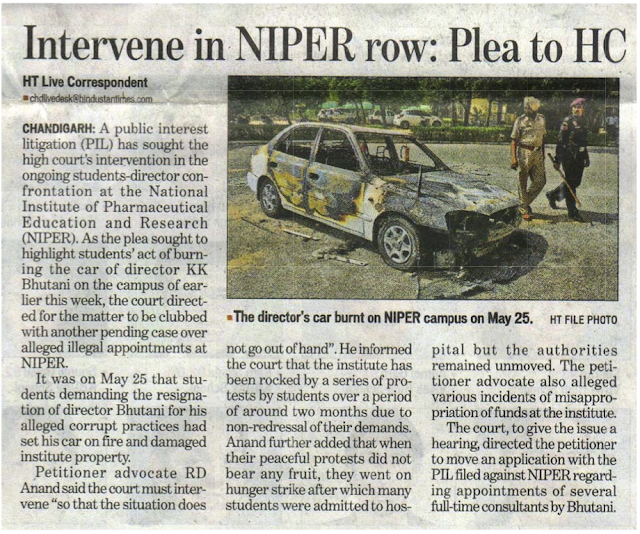 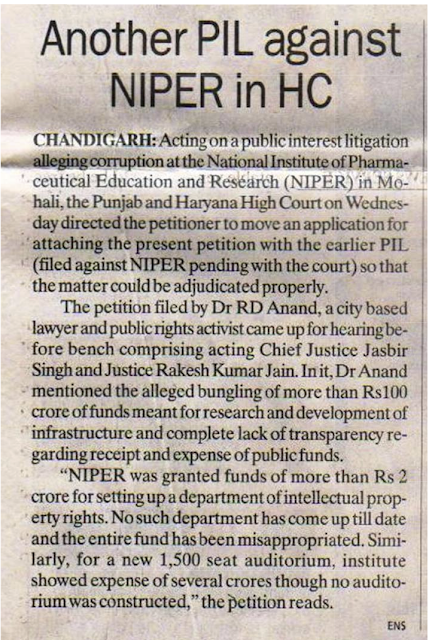 How Problem of NIPER kept invisible

".....letter of BJP MP to Minister of Chemical and Fertilizer Mr. Jena was marked to Ministry and Ministry DID NOT SENT it to Secretary, DOP. Sent it to the lowest section officer in Ministry who in turn sent it to BR Sharma, Asstt. Registrar, Establishment- a very junior person with no powers. Why all officers in between became invisible? So that later if any problem occurs they can say we did not know or were not informed? Very very smart!" 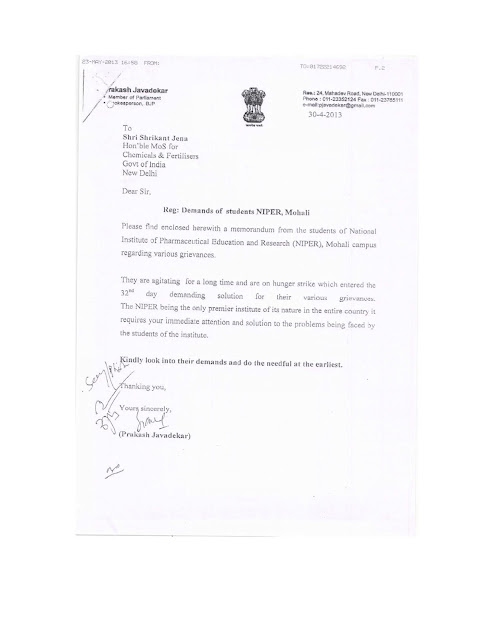 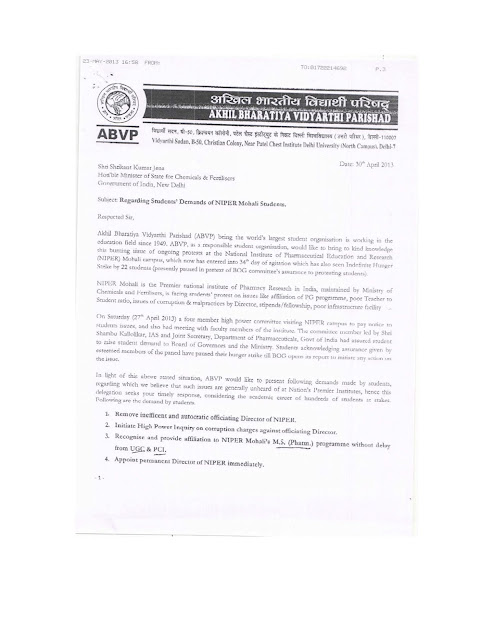 Beginning of the end of "Institute of National Importance"

Posted by Knowmics at 09:41 No comments:


Protesting students of the prestigious National Institute of Pharmaceutical Education and Research (NIPER), Mohali today gheraoed the office of the DG, ICMR, Dr.V.M.Katoch during the 60th Meeting of the NIPER Board of Governors (BOG) Chaired by Dr.Katoch and demanded sacking of NIPER Officiating Director, Dr.K.K.Bhutani.

NIPER is an autonomous institute under the Ministry of Chemicals and Fertilizers, presently headed by Union Minister Mr. Srikant Jena. Mr.D.S.Kalha, IAS is the Secretary, Department of Pharmaceuticals which funds the institute. The officials have remained indifferent to the suffering and plight of the students who have been protesting since 28th March, 2013 regarding rampant corruption at NIPER running into several crores, poor placements, non-recognition of their degrees, discriminatory award of scholarships, inadequate research, medical and hostel facilities and a host of other issues including removal of their teachers in the midst of academic session, affecting ongoing Master’s and Ph.D projects. Interestingly, more than 30 students were hospitalized during the hunger strike, but still authorities remained unmoved.

Significantly, NIPER in recent years has drastically increased number of seats but faculty strength has remained low, leading to erosion of academic standards. Allegedly, more than Rs.100 crores of research and development funds sanctioned to NIPER under 11th Five Year Plan (2007-12) has vanished under the Directorship of Dr.K.K.Bhutani. A department of intellectual property rights for which institute got Rs.2.25 crores has not been established till date. Similarly, a new specialization in R&D management for which institute got more than Rs.1 crore has not been started. A new auditorium on which institute claims to have spent several crores, does not exist-not a single brick has been laid! Similar is the story in several other projects and schemes for which funds were sanctioned but work and progress did not take place at all.

Three NIPER faculty members viz. Dr.Nilanjan Roy, Dr.Neeraj Kumar and Dr.Parikshit Bansal who raised their voice against corruption at NIPER, were thrown out, leaving Ph.D/Masters’ students working with these teachers, in the lurch and affecting ongoing classes being taken by these faculty. While the BOG acted swiftly against the faculty members who complained against Dr.K.K.Bhutani, it took no action against Dr.K.K.Bhutani, who joined temporarily for few months, on 1st January, 2010 but has continued in the seat for more than 3 years. Interviews for selection of new director were completed in December, 2012, but results are yet to be declared by Dr.V.M.Katoch.

Holding Dr.Bhutani responsible for poor governance, large scale corruption and mismanagement at NIPER, the students have been demanding his removal for last nearly one month. During a personal meeting with Mr.Srikant Jena about 2 weeks ago, they were assured of ‘strong disciplinary action’ against Dr.Bhutani within 8 working days, but nothing happened. When students tried contacting Mr. Jena again, they were informed that he had left for his home state.  BOG members/ authorities are not moved by the peaceful protests of the students whose careers are at stake. Details of large scale bungling of funds relating to 11th Five Year Plan and 12th Five Year Plan and also various demands of students are posted on a website‘www.niperstrike.weebly.com’.

Another blog, ‘BIPED AGAINST CORRUPTION’ (http://bipedagainstcorruption.blogspot.in) contains more than 250 postings relating to corruption/nepotism and victimization at NIPER as revealed under RTI. However, the accused remain unaffected.

“NIPER has no money to pay for appointment of full time placement officers for its students. However, it has sufficient money to pay several lacs to ‘consultants’ who have been hired by Dr.Bhutani, mainly to fight court cases and protect the interests of Dr.Bhutani ” said the students. Interestingly, the appointments of full time consultants at NIPER were carried out by Dr.Bhutani, without any advertizements and salaries fixed in arbitrary manner. The appointments have already been challenged vide a public interest litigation filed by a city based RTI activist, Dr.R.K.Singla.

Earlier, the appointment of NIPER Registrar, Wing Commander Mr.P.J.P.Singh Warraich made by Dr.Bhutani in absence of regular Board of Governors, was also set aside by the High Court on grounds of gross irregularities and is now pending in appeal before double bench.

Posted by Knowmics at 07:10 No comments: 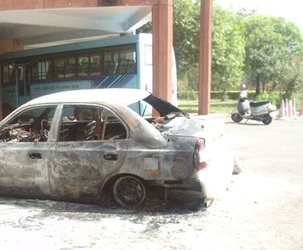 HT Correspondent, Hindustan Times SAS Nagar, May 25, 2013
Students of National Institute of Pharmaceutical Education and Research (NIPER), SAS Nagar set officiating director KK Bhutani's car on fire in the wee hours on Saturday. According to the information, students who have been demanding director's resignation from last two months, had gone to attend Board of Governors meeting in New Delhi on Friday, where they were not given any satisfied response. After coming back to campus, the angry students set the car on fire around 3 am.
When contacted no student was ready to speak on the matter. While SAS Nagar city superintendent Swarandeep Singh, said they had not received any written complaint from NIPER authorities so far, when we do we will act accordingly.
The police had reached the campus and was investigating the matter at the time of filing the report.
Posted by Knowmics at 15:43 No comments: 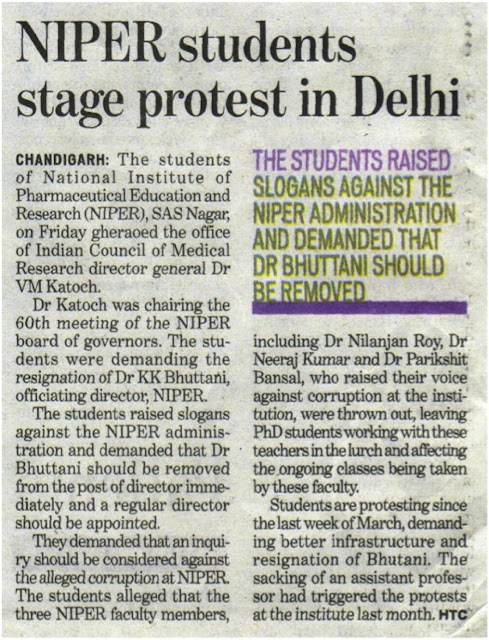 Posted by Knowmics at 15:42 No comments:

Mohali 24th May 2013 NIPER BOG meeting is disrupted by NIPER Mohali students at ICMR DG's office in Ramalingaswmy Bhawan, New Delhi today. Chairman BOG called the police and students were barricaded off at the gate. Students hold their protest at the gate of ICMR office. After a while NIPER girls entered the building and put their massage in front of 13 BOG members. However their demand was not fulfilled by BOG citing the reason that they are helpless. Students are planing to take their protest to the door of President of India who is also Visitor of NIPER.
Posted by Knowmics at 20:43 No comments: