DOP, New Delhi has appointed new Officiating Director, NIPER-Mohali. None of existing NIPER Mohali faculty members found sutable even for officiating director This is really strange! As per rule, charge goes to next senior most after Director retires. 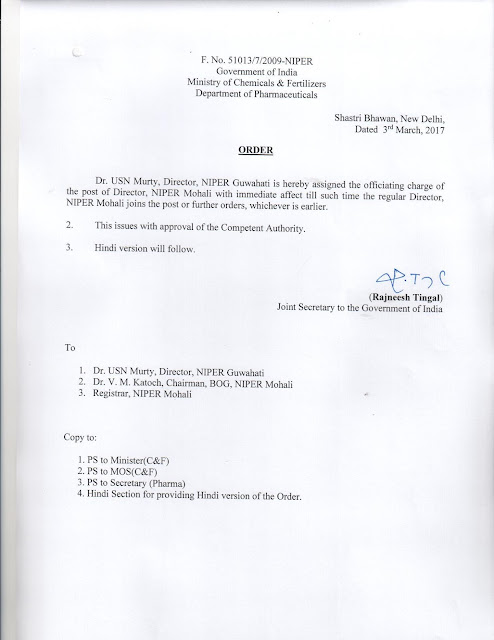 Dr. Parvinder Singh; Chairman and Managing Director of Ranbaxi was  member of several key committees constituted by the Government of India and played an active role in the formulation of policy related to science and technology, intellectual property and the pharmaceutical sector. He was an active member on the governing bodies of several leading educational and management institutions in India. He was committed to uplifting the standards of education in pharmacy and piloted the setting up of the National Institute of Pharmaceutical Education and Research, the premier pharmacy institution in India.

Professor Harkishan Singh ‘Professor Emeritus’ at the Panjab University (Chandigarh, India). He is a well-recognized pharmaceutical academic, medicinal chemistry researcher and science historian. He has experience of over half a century to his credit. He has worked at the Banaras Hindu University, University of Saugar, and the Panjab University in India. Professor Singh was also instrumental in setting up of the National Institute of Pharmaceutical Education and Research.

In one of NIPER event, Professor Harkishan Singh narrated,

While returning back, Dr. Parvinder Singh paused on Shastri Bhawan staircase, smiled at me and whispered softly,