DR. JANARDHAN WAGHMARE, Hon'ble Member of Parliament, Rajya Sabhva asked the question
1900 (b) (b) details of various committees functioning at NIPER which have not been formed as per NIPER Act, Statutes and Ordinances;
in Rajya Sabha held on Friday, December 9, 2011/Agrahayana 18, 1933 (Saka)


Truth is already communicated to BOG NIPER by DR. NEERAJ KUMAR and a case is filed CWP18789/2011 NEERAJ KUMAR & ANR. vs NIPER AND UOI  regarding wrong constitution of Senate and award of degree

2.  Officiating Director has terminated the existing senate before completion of its tenure of three years (March 2009 – March 2012), which is a violation of NIPER Act and Statutes as Senate is also a statutory body like BoG, Finance Committee etc.

3.   As per NIPER Act section 13 and NIPER statute clause 3, there should be three persons from outside in Science, engineering and humanities and new senate will have 4 persons outside and one of them, Prof. H. S. Nigah is the previous member and also the yes man of current officiating director.

4.  In the new senate, the representation of departments is not given rationally for example a) three faculties are from medicinal chemistry b) No faculty is from biotechnology department.

6. The senior professor from department of Pharmacology and toxicology has not been given the chance in the new senate who has not represented the senate; however there are few professors who are getting frequent chance for the same.

Thus, as a responsible employee of NIPER and responsible law abiding citizen of India, I humbly request you to look into the matter and enforce the conditions so that Institute should be run as per NIPER Act, Statute and ordinances.


How Senate was made when NIPER was not Sick!!

MINUTES OF 31ST MEETING OF BOARD OF GOVERNORS OF NIPER HELD ON 24/10/2000 AT 11.30 HOURS UNDER THE CHAIRMANSHIP OF DR R.A.ASHELKAR, DIRECTOR-GENERAL, NEW DELHI.

The 31st meeting of Board of Governors of NIPER was held on 24th October, 2000 at 11.30 hours in the Conference Room of NIPER, S.A.S.Nagar (Mohali) under the Chairmanship of Dr R.A.Mashelkar, Director-General, Council of Scientific & Industrial Research, New Delhi.

Dr R.A.Mashelkar, Chairman, Board of Governors while welcoming all the members to the 31st meeting observed that the attendance for this meeting was rather thin. He felt that there was a need for the participation of members not only from the field of Education, Research but also from industries, as their guidance will be very useful for the Institute. It was also felt that the date for the next meeting may be finalized immediately so that sufficient notice for the meeting can be given to all the members sufficiently in advance.

Sh. N.Sundaram, Secretary of the BOG circulated copies of Govt. of India,Ministry of Chemicals & Fertilizers, Department of Chemicals & Petrochemicals (Finance Division) letter No.23(14)99-Fin. dated 20th October, 2000 which contained comments of the Finance Division on the agenda papers for the 31st meeting of Board of Governors of NIPER. The BOG took note of the same. Thereafter, the agenda items were considered in seriatim and the deliberations on the same are detailed.

AGENDA ITEM NO.3 THE NOMINATION FOR THE SENATE AND VARIOUS COMMITTEE AS PER NIPER ACTS AND STATUS.

This agenda item as presented has been considered in the light of the fact that the draft statutes have already been perused by the Ministry of Chemicals and Fertilizers and returned to the Institute. The Board approved the following nominations:

The tenure of the Senate will be for a period of three years. 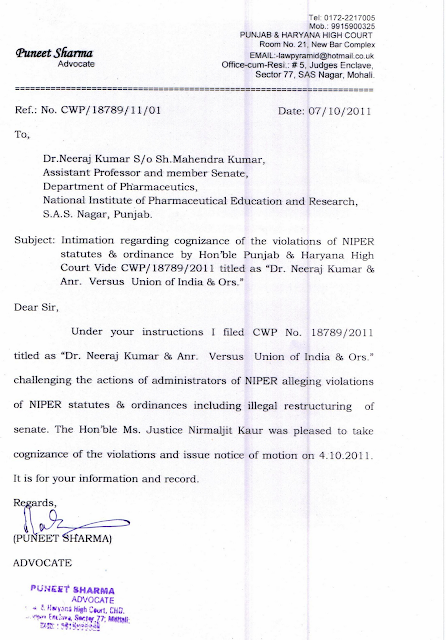