In response to 25 plus specific questions of BOG members related to Financial and Administrative lapses the officiating director K. K. Bhutani submitted six pages of emotional fib. The only defence he could put up "three tented faculty members defaming NIPER globally. I categorically state that there is no "breakdown of systems and procedures" .


He cried infront of Board that "Three faculties; one dismissed, one under inquiry and another under fact finding committee making my life miserable.


READ not allowing to do my corrupt practices and accepting bribes for recrutement".


In response he got answer "........your emotional response is not good enough to wash-down charges ..........produce documentary evidences"


Unfortunately he forget that the chairman BOG already gave patient hearing to all three faculty members and got the test of truth.


NO BREAK DOWN OF SYSTEMS AND PROCEDURES!!!!!

20 lakhs for Registrar appointment, part of OF SYSTEMS AND PROCEDURES!!!!! 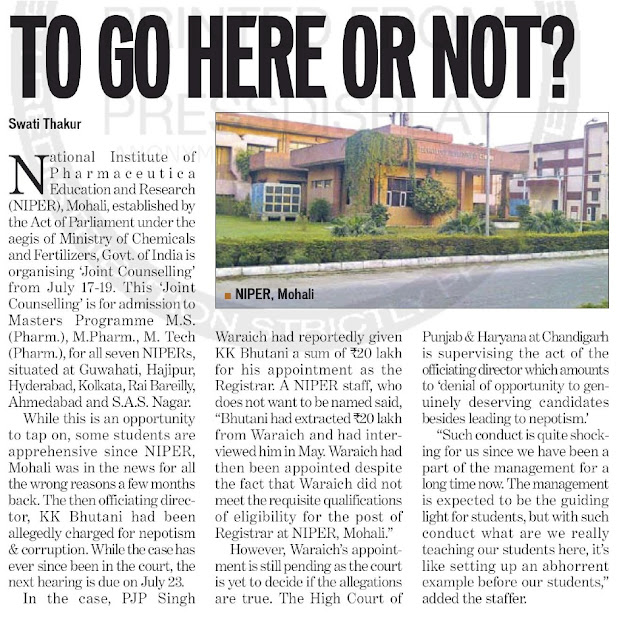 Recrutement of three in one professor part of OF SYSTEMS AND PROCEDURES!!!!!

GOD knows how much money is exchanged? Obviously more then 20 lakhs Professor's salary is more then registrar's

Ad-hoc appointment of Dr. Naresh Kumar as Professor in NIPER

NIPER Administration /Offg. Director has given 3 different statements at 3 different places regarding appointment of Dr.Naresh Kumar.

Statement 2 :  Appointment of Dr. Naresh Kumar is as Professor in Business Development Group, NIPER (Statement of Prof. K.K.Bhutani given to the Chairman, APDC and duly documented  in SIGNED final minutes of 13th APDC meeting held at NIPER on 19-11-2011, as agenda item no. 13.6)

Moreover the appointment is made without any advertisement and without proper selection committee. The regular selection process (as per  NIPER statutes and Govt. of India rules and constitution Art, 14 regarding equal opportunity)

Extension of Ad-hoc appointment of Dr. Jyoti Paliwal as Professor in NIPER part of OF SYSTEMS AND PROCEDURES!!!!!

How much Bhau paid for his job and extension??


In the meeting held on 28th of May 2012 the appointment and extension of Dr. Jyoti Paliwal was discussed It was inquired by one hon'bel BOG member whether any advertisement in this effect was published The reply of the BOG secretary was negative. it is opined by the Members that advertisement is a must before filling a regular post.
After deliberation the BOG unanimously resolved that in order to keep the principle of Natural justice and fairness in the view, the advertisement of Professor should be released so that the best tallant can be recruited.

However the extension letter is served even before draft minute is typed. The same registrar (!!) replied in many RTI quarry even after one month of BOG meeting. ".........since BOG minutes is not ratified information can not be disclosed."

"Come on!" at least have the guts to to tell the truth, face KNOWMICS in BOG meeting with documents