Chandigarh: The Central Bureau of Investigation (CBI) has widened its probe into the Niper scam, scanning the alleged irregularities in appointments, wrongful extension and non-reporting of theft of scientific instruments.
A day after nine officials of National Institute of Pharmaceutical Education Research (Niper) in Sector 67 of Mohali were booked for allegedly siphoning of funds released by the central government for the establishment of intellectual property rights department and making inflated purchases, sleuths on Saturday started to investigate the continuance of K K Bhutani as the officiating director of Niper after crossing the retirement age of 62 years, how wing commander P J P Waraich (retd) was allegedly appointed against the procedure and why the theft in the department of pharmaceuticals was hushed up.
Sources said, "The non-supply of stipend money meant for research students is also under investigation. Though the FIR is particularly registered for diverting Rs 2.25 crore and purchasing global patent database software Scifinder at a higher cost, other issues are also part of the investigation."
A senior CBI official said, "Bhutani should has been relieved from his current post in 2013. In the case of appointment of Waraich as registrar, rules were flouted." The member of the investigation team said the supply of irrelevant documents and non-cooperation from the accused spurred the investigation agency and raids were conducted at 22 locations.


he prime complaint against Niper officials was misuse of central funds to purchase the software at higher rates from a Pune-based company. Sources said the company supplied annual licences for accessing global patent database software Scifinder at the rate of 31,000 US dollars to others, including PGI, while it supplied the licences to Niper at 55,000 US dollars, causing a loss of crores of rupees.
Sources said a few accused were grilled at the CBI headquarters in Sector 30 but they failed to supply relevant documents. Some of the officials transferred on promotions were summoned for questioning.


Though initial complaints were filed by three sacked Niper professors Parikshit Bansal, Nilanjan Roy and Neeraj Kumar, the CBI lodged an FIR on a secret information, making the three supporting witnesses in the case. Sources said statements of the three were recorded to establish misappropriation of funds. Sources said before lodging the case, Bhutani was questioned at length in connection with all allegations levelled against him. 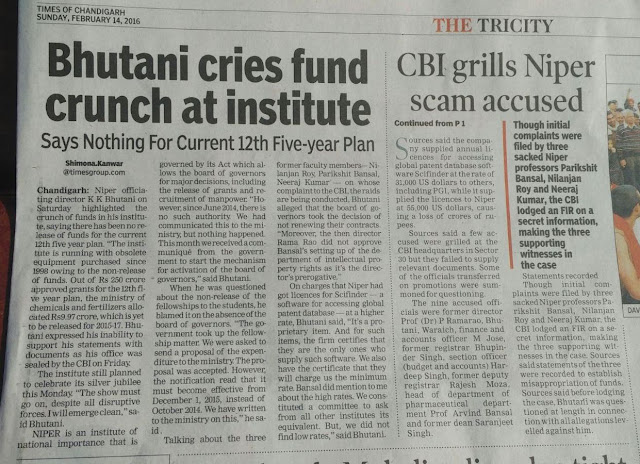