Large number of construction projects was initiated under 11th  five year plan at NIPER. Civil works of many building is completed, but the building are standing un utilized either because they are not furnished or no money for equipments/manpower or no money for running/recurring cost. Thus they are standing idle and providing shelter to pigeons. Two of them are depicted here
A. Swimming pool

A huge Olympic size pool is build under 11th five year plan at NIPER for more then1 crore and the construction is completed all most a year ago. Project investigator of Drugs for most neglected diseases (Scheme N18) under the 11th five year plan (2007-12) says that part of the money received for the project was diverted to fund the escalated construction cost of swimming pool.
However the pool is never used after construction, because there no electrical connections to run the entire building and the filter pumps installed in the pool. Moreover there is no budgetary allocation for recurring cost for running the pool.
Though NIPER have a Olympic size non functional swimming pool, NIPER lacks a decent size lecture hall to accomodate increasing number of students. Many common classes are splited and faculties are forced to conduct the same class in two or three shifts in a week like recurring movie show. For each lecture large number of students are squeezed into tiny lecture halls.
Laboratories are not specious enough to accomodate and do the practical research work so many students just get a chance to peep in the experiments ongoing in the lab from corridor without getting a hands on experience.
Now the question is why this pool is build, with a cost over run, for which the money received for Drugs for most neglected diseases is diverted?  Probably getting kickback is easier from construction project rather then a research project. Thus Indian taxpayer money is gone down the drain for the whims and fancies of the person who decided build Olympic size swimming pool for personal gain putting National interest aside. I feel ashamed whenever I see a  poor country man who is suffering from neglected diseases like Tuberculosis or Leishmaniasis.
B. Community center:
The same story repeated again for Community center  A odd shaped building with big cover area and less utilizable space is built utilizing approximately 40 lakhs.

Other then the concreet structure all the basic amenities inside the building are lacking rendering it unusable. Moreover architecture is such that it can only accomodate 40 people, uncomfortably because of bad acoustics noise. Inaugurated by Secretary, Department of Pharmaceuticals with a huge fanfare on 4th Oct 2010. After that many occasions and functions happened in NIPER. The building is not used for a single hour. Neither any NIPER community (Faculty, Staff, Students) is interested to use it not even for kitty party. 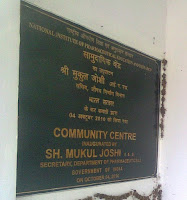 So what was the dire need for building it? Intended for what use?


This is just the tip of the iceberg. There are more un-utilized pigeon shelters like these at NIPER. Few examples are 'Schedule H' compliance formulation plant, Parasitology building,  Bioavailability center etc. etc. List is long..............

More construction is being planned for 12th five year plan also. Sorry my under privileged fellow Indians you still need to thrive on Rs32 a day.
Posted by Knowmics at 05:50