Misleading answer provided to Lok Sabha by Department of Pharmaceutical, Ministry of C&F

FD Interest loss of 49.56 lakhs: the answer given to Lok Sabha by Hon'ble MOS Srikant Jena is wrong and misleading suppressing the loss of exchequer. final report even espores more loss total 102.16 lakh

Para I                 Loss of Interest-Rs. 49.56 lakh
The institute had been maintaining Endowment Fund (Corpus Fund) as per the directions (November 1997) of the Ministry of Chemicals & Fertilizers, Department of Chemicals & Petro-Chemicals, Govt. of India (GOI)

Audit observed that as om 31st March 2010, the institute was having balance of Rs. 25.24 crore in the Fund which was invested in fixed deposit in the State bank of Patiala, Mohali.

NIPER response to the Para

In the case pointed out by the audit, it is intimated that funds were invested at the competitive prevailing rate @ 7.25% in August 2005 and there after six months the rates were increased to 8.10% for the fresh investment. The matter were also taken up with State Bank of Patiala on the subject and bank has replied that

1. Better rate of interest 8.10% in may 2006 was for fresh particulars deposits for a particular period and was not ment for existing deposits.

2. As per bank policy, interest on deposit is being paid at contracted rate and not vary with every rise & fall

Caveat: But why it is not withdrawn prematurely and reinvested Mister F&AO and Chairman Investment committee? loss of 49.56 lakh is whose responsibility? (after adjusting interest loss of Rs. 16.84 lakh due to premature withdrawal of fixed deposit of Rs. 10.89 crore)

Thus it is clear CAG did not buy NIPER justification and para was not settled, loss of the exchequer remains. Question is why Mr. Jena, MOS give wrong response to LokSabha?? 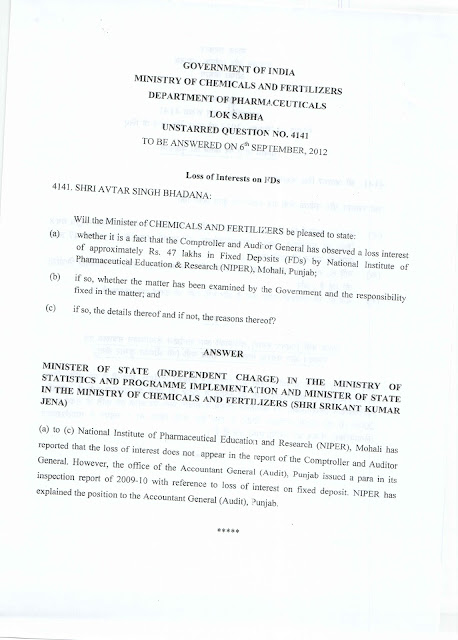