4231 SHRI GAJENDER SINGH RAJUKHEDI: SHRI UDAY SINGH: Will the Minister of CHEMICALS AND FERTILIZERS be pleased to state:

(a) whether the Government/Board of Governors of National Institute of Pharmaceutical Education and Research (NIPER) have written complaints regarding financial irregularities including the non-approval of Budget estimates for 2012-13, especially for NIPER, SAS Nagar, Punjab;

Meaning, Government/Board of Governors of National Institute of Pharmaceutical Education and Research (NIPER) have not received any written complaints regarding financial irregularities.

Paper available with us are in the contrary of the answer.

Several complains have registered with Minister, MOS, Secretary, Joint secretary who is Chief Vigilance Officer of the department & who also happens to be member of BoG, NIPER; by faculty members of NIPER as well as their famaly members.

Moreover complains are also lodged with Chairman BOG, by faculty members. Even a requisitioned meeting is also called in the issue by four BOG members see attached documents.

Now question is why Mr.Jena is lying to Lok Sabha? 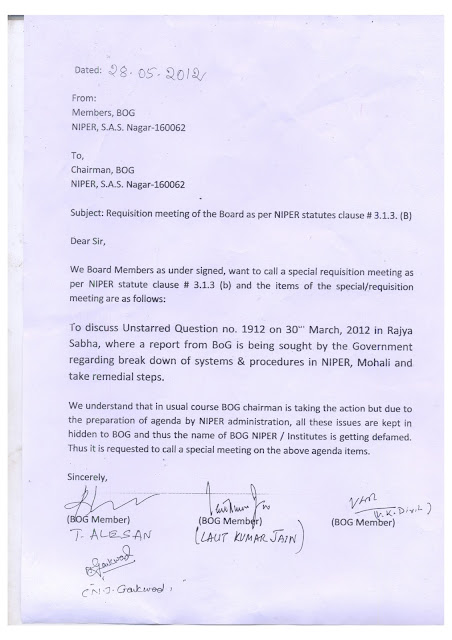 NAMASKAR. This is to remind the chairman that a letter was submitted to the Chairman on 28.05.2012, the day of last BOG meeting held in NIPER, Mohali, signed by four BOG members to hold a special BOG meeting to discuss the various issues haunting the NIPER, Mohali in order to answer Questions posed in the Parliament of India regarding the failure and break down of administrative and academic system of NIPER, Mohali. As per the clause # 3.1.3[b], the meeting need be convened within 15 days from the date of submission of letter. Therefore, we request sincerely the Chairman to announce the date at the earliest.

Thanking you.
Yours sincerely 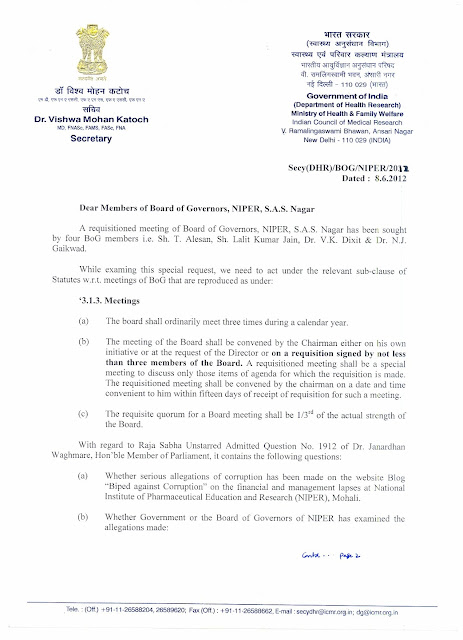 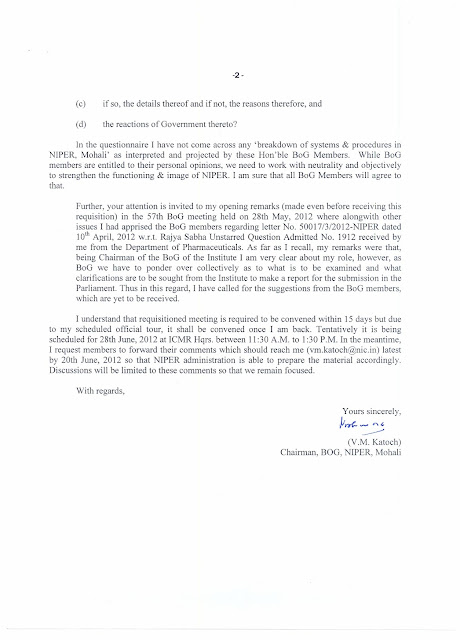 Dear Dr. Katoch,
Thanks for conveying the Requisition Meeting, tentatively on 28th June, 2012 in New Delhi:-
“To discuss Unstarred Question no. 1912 on 30th March, 2012 in the Rajya Sabha, wherein a report from the BOG is being sought by the Government regarding breakdown of systems & procedures in the NIPER, Mohali and take remedial steps.”

Your contention that you appraised the BOG Members regarding letter no. 50017/3/2012-NIPER dated 10th April, 2012 w.r.t. Rajya Sabha Unstarred Question Admitted No. 1912 is unfounded. There is no reason as to why this important communication to the Board was not placed as a part of the Agenda of the 57th BOG as it was received well in advance. This shows the arrogance and aristocratic prejudice on the part of the dyfunctional NIPER administration in an abject bid to cover up malpractices and undermine the sanctity of the Parliament, enshrined in our constitution.

Your remarks that you are very clear about your role, that the BOG has to ponder over collectively and we need to work with neutrality and objectively to strengthen the functioning & image of the NIPER has never been forcefully put to practiceing the BOG meetings chaired by you till now.

Issue of appointment of the Regular Director has been dragged for over a year while the tenure of this BOG is only for a period of three years.

Important issues like CAG observations, Budget for 2012- 2013, and lack of internal Audit Systems have also led to the need for requisitioning a Special meeting, in the history of the NIPER for the first time.

Non functioning of departmental & statutory committees tantamounts to breaking down of the laid down systems & procedures leading to mal– administration including delay in imparting justice as well as victimisation in several instances whichhave led to filing of litigation cases, and such serious lapses on the part of the NIPER administration have also never been discussed in the BOG Agendas.

The allegations on the blog “Biped Against Corruption” has already listed lot of serious allegations and therefore, on behalf of the Board, you should direct the NIPER Administration to give their response item-wise of their side of the picture supported by documents.

The Board after sorting out the issues could hold a BOG Meeting where the accuser and the NIPER Administration/persons against whom the allegations have been made could present their views before the BOG.

The findings of the BOG should be tabulated into the report and submitted to the Parliament of India to fulfill the assurances of Department of Pharmaceuticals.

Please ensure that the background papers, response to the NIPER should be made available to the BOG members at least seven days in advance before the schedule of Meeting. 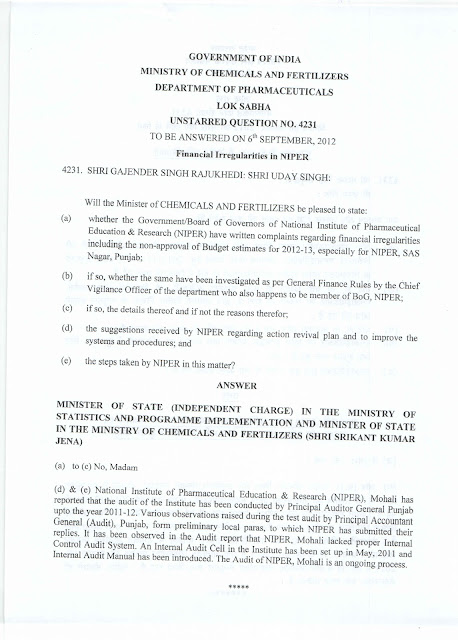