Arvind Saklani, Senior Group Leader at Piramal Life Sciences, Mumbai, worked at NIPER for three years as Assistant Professor, and left the institute in 2007, before his contract finished. Talking to The Indian Express, he said, "I had joined NIPER with a dream of great scientific research, but my experience was really bitter. Because of some people in the senior faculty, the institute has deteriorated much. Somebody else takes the credit for your research, and you have to compromise with your work, your ethics," said Saklani


MINUTES OF THE 27TH MEETING OF BOARD OF GOVERNORS OF NIPER HELD ON 14TH FEBRUARY, 2000 AT 3.00 P.M. UNDER THE CHAIRMANSHIP OF SHRI ARVIND VARMA, IAS AT SHASTRI BHAWAN, NEW DELHI.
Agenda Item No.7:
The Board approved the appointment of the following faculty members in various Departments.
It was, however, pointed out by the Director that, based on the background of Dr U.C.Banerjee, it would be better that Dr Banerjee is made Professor in the Department of Biotechnology rather than Pharmaceutical Technology. This was agreed to.
Prof. Harkishen Singh raised a point regarding making Dr Banerjee, Professor and Head of the Department of Biotechnology. The Director felt that it will be desirable to see the working of Dr Banerjee for a couple of years before he is appointed as Head of the Department.
Wise visionary anticipated something? However Dr. Banerjee became HOD eventually


MINUTES OF THE 40TH MEETING OF THE BOARD OF GOVERNORS HELD ON 27-11-2003
40.7 TO CONSIDER APPOINTMENT OF DR U.C.BANERJEE AS HEAD OF THE DEPARTMENT, PHARMACEUTICAL TECHNOLOGY.
Approved.
After being HOD he started tormenting juniors, who was not subscribing his way of doing science. Dr. Animesh Roy started protesting and the matter got nasty. Though Dr.  Roy was a good scientist and the first patent granted to NIPER was authored by him, this HOD successfully scuttled his career to hide own act of plagiarism. After plenty of personal effort of Dr. Roy BOG made a committee to look into the matter.


Terms of Reference:
1. To review the case of Dr. Animesh Roy, Ex-Scientist, NIPER, SAS Nagar and suggest the remedial measures.
2. The Committee is required to submit its report on or before 31st January, 2009 to the Chairman, BOG.

However, the current officiating director rewarded  the HOD with deanship (to propagate plagiarism amongst students?) 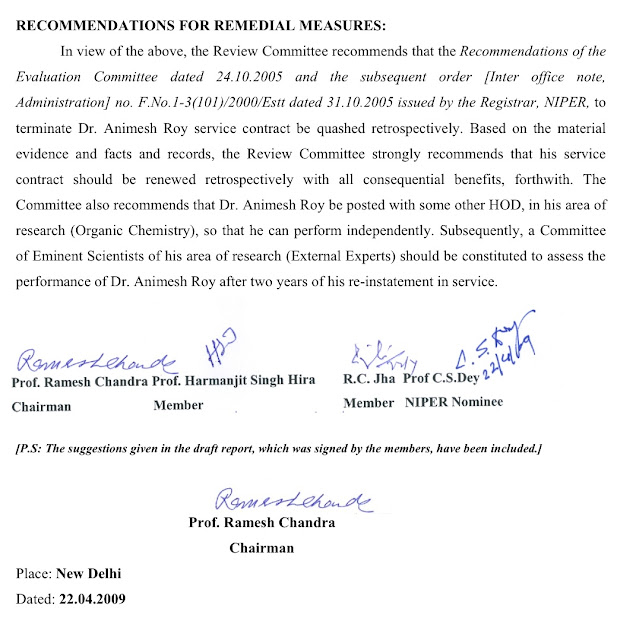 After two and half years of the committee decision and after six years of termination; Dr. Roy is reinstated in NIPER from 1st September 2011
Caveat: if BOG reinstate him retrospectively and NIPER have to pay him salary for six years (without any work) who should pay?
Taxpayer of India? or
Five Professors responsible for wrongful termination?
Prrrrrrrrroud anonymous student want to have fun, have any answer ?
Posted by Knowmics at 07:37